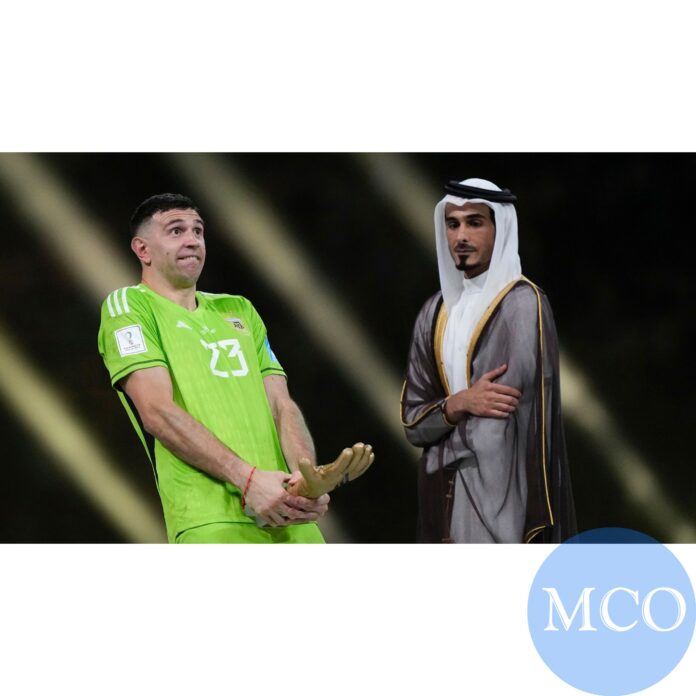 Argentina won their third FIFA World Cup title after beating France 4-2 in the penalty shootout after the match was tied 3-3. While one of the greatest ever footballers of all time Lionel Messi was bound to take all the attention away naturally given he finally won a World Cup trophy, the only one missing from his illustrious cabinet and with a brace, he helped that attention to increase further, however, it was the goalkeeper Emiliano Martinez, who stole it away by the time the match ended.
Martinez won the Golden Glove for his performance in front of the net throughout the World Cup and his show in the summit clash only increased his chances of receiving the award. However, not just his performance that made him steal the limelight was his actions apart from that. Martinez was pure vibe as he not only entertained with his superb saves, the ones rather decisively in the penalty shootout but with his dance moves and celebrations too. It seemed like the 30-year-old Aston Villa goalkeeper was enjoying himself to the fullest being part of such an iconic game and he just reveled in it.
recommended by

OLYMP TRADE
Earn $700 Every 60 Minutes From Your Computer
LEARN MORE
After saving a goal in penalties, Martinez danced his way back to his position knowing that the win was closer for Argentina than anybody thought and then what made him grab the headlines the most was his celebrations after receiving the Golden Glove award. Martinez made a lewd feature with his trophy, which caused a huge stir on social media.
While many lauded Martinez for being fearless and not caring about anyone, however, several others thought that it was in bad taste. Argentine fans recalled that this is not the first time he has celebrated like this but since it was the World Cup final, it had more eyeballs on it.