Amid namaz row, Lulu Mall management says ‘we respect all religions, but do not permit any religious activity’ 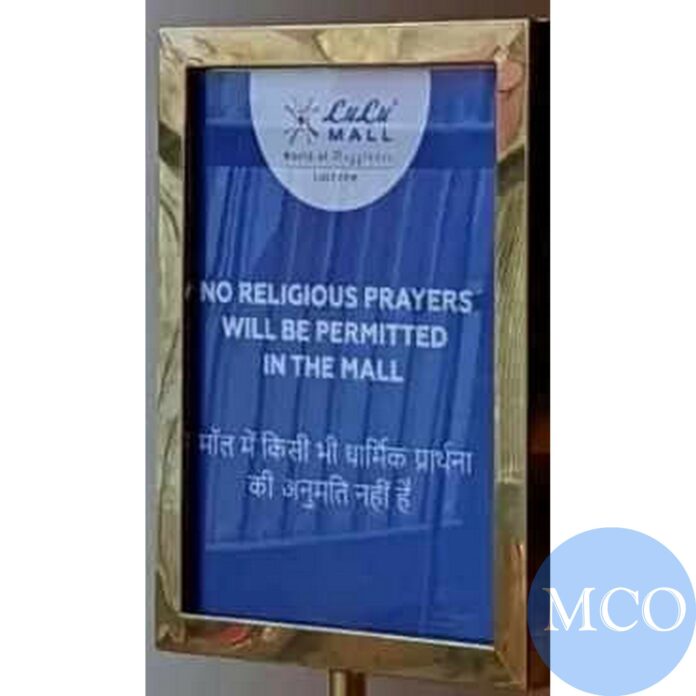 Lucknow: Amid the controversy over namaz in Lulu Mall in Uttar Pradesh, the mall management on Friday in its notice board categorically stated that ‘no religious prayers will be permitted in the premises’.
A massive controversy erupted after a video showing a group of people offering namaz in an open space in Lulu Mall started doing rounds on social media.Sameer Verma, general manager the mall in Lucknow, released a statement saying, “Lulu Mall respects all religions. Any kind of religious work or prayer is not permitted here. We train our floor staff and security staff to keep an eye on such activities.”

Meanwhile, police have registered an FIR against unidentified persons for allegedly offering namaz in Lulu Mall.
Expressing anger over the namaz incident, the Akhil Bhartiya Hindu Mahasabha issued a warning and sought permission from the local authorities to recite the Hanuman Chalisa near the mall.
“People from a particular community are being allowed to offer namaz inside the mall. The mall authorities should also allow Hindus and people for other communities to offer prayers,” Sishir Charturvedi, spokesman of the Mahasabha, was quoted by news agency PTI as saying.

Interestingly, the mall was inaugurated by Uttar Pradesh Chief Minister Yogi Adityanath on July 10 and has been opened by Abu Dhabi-based Lulu Group, led by Indian-origin billionaire Yussuf Ali M A. The mall is located on the Amar Shaheed Path, Golf City, and has the outlets of some of the biggest brands in India.
The Akhil Bhartiya Hindu Mahasabha also alleged that love jihad is promoted in Lulu Mall. The hIndu group claimed that 70 per cent of the employees hired in the mall were from the Muslim community while the remaining 30 per cent are Hindu girls so that love jihad can be started.