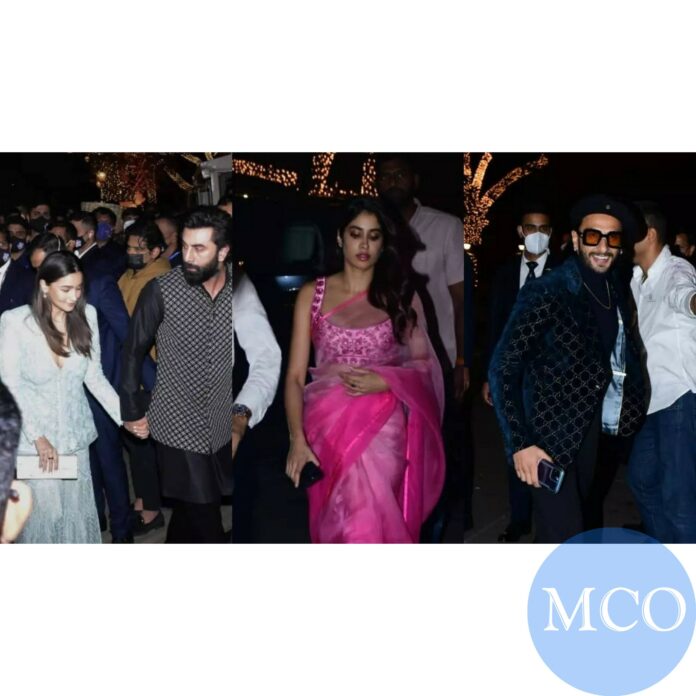 Billionaire Mukesh Ambani’s youngest son Anant Ambani is all set to tie the knot with Radhika Merchant and pre-wedding festivities have begun! On Thursday, the beautiful couple had a grand engagement party at Ambani residence Antilia, Mumbai. As the couple reached home from the airport after their visit to Rajasthan’s Shrinathji Temple in Nathdwara, Bollywood stars arrived at the lavish abode to be a part of the celebrations.
CELEBS AT ANANT AMBANI-RADHIKA MERCHANT’S ENGAGEMENT PARTY
Superstars Shah Rukh Khan, Salman Khan, Alia Bhatt, Ranbir Kapoor and Ranveer Singh were reportedly among the others who attended the bash on Thursday evening. Janhvi Kapoor, Ayan Mukerji, Meezan Jafri, Sagarika Ghatge, Armaan Jain, Orry Awatramani and Mika Singh were also part of the celebrations. Former Maharastra Chief Minister Uddhav Thackeray was also seen arriving at Antillia with son Aditya Thackeray.Bollywood’s Karan and Arjun also reached Antilia for Anant Ambani and Radhika Merchant’s engagement party. They both avoided posing for the paparazzi but the shutterbugs did catch glimpses of the superstars.

CELEBRATIONS AT ANTILIA
The newly-engaged couple Anant Ambani and Radhika Merchant received a grand welcome. They were showered with rose petals as they reached Antilia for the party.
The Ambanis know how to celebrate and the recent occasion was also a spectacular affair. Apart from the star-studded guest list, the decorations stole the show. Dhol beats, nagade and breathtaking fireworks at Worli sea-link completed the grand celebrations of Anant and Radhika’s engagement.