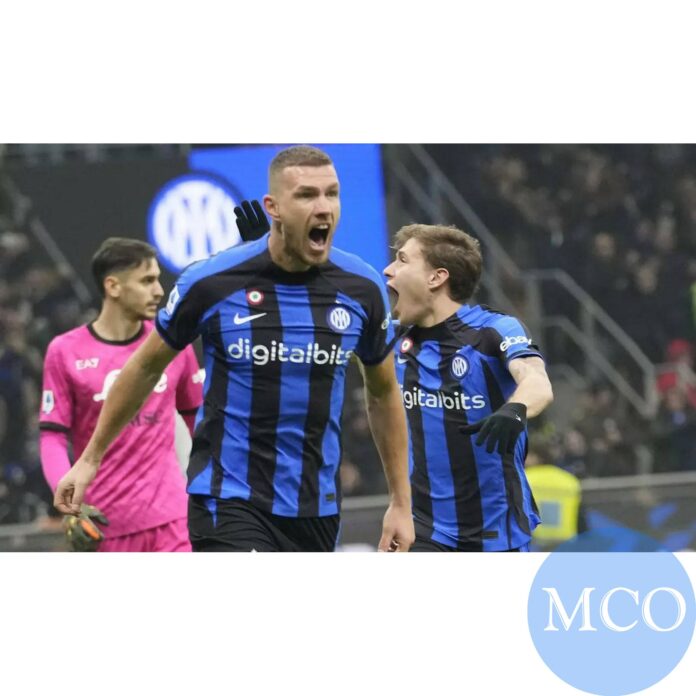 Second-placed AC Milan were the main beneficiaries of their local rivals’ win at the San Siro, their title defence boosted by a 2-1 win at Salernitana in the day’s first match.
Also lurking are Juventus, who sit third and a further two points off the pace following their last-gasp 1-0 win at Cremonese.
Inter should have been ahead before Dzeko netted the winner, with Matteo Darmian wasting a perfect lay-off from the Bosnia captain midway through the first half when he smashed over the bar.
An underwhelming Romelu Lukaku also shot over as Inter failed to fully capitalise on their clear superiority over disappointing Napoli, and they almost paid the price when Giacomo Raspadori’s late shot was well-saved by Andre Onana.
Juve run continues
Poland forward Arkadiusz Milik struck his fifth league goal of the season in added time with a free-kick which handed Juve their seventh straight win, a run in which they haven’t conceded a goal and will give them a boost after scandal hit late last year.
Juve have been accused by prosecutors of a variety of financial crimes while UEFA are also probing Italy’s biggest club, whose entire board stepped down in November and will be replaced later this month.
“It’s a good win and another step forward… Milik scored a great goal, but it wasn’t an easy win. It’s not simple facing Cremonese,” said coach Massimiliano Allegri to DAZN.
Cremonese are still yet to win a game in their first top flight season since 1996 but they struck the woodwork twice and will be encouraged by successive home draws with Milan and Juve either side of the break for the World Cup.
The away fans drew applause from all sections of the Stadio Giovanni Zini in the first half when they displayed a banner in support of former Italy striker Gianluca Vialli, who is battling pancreatic cancer in London.
Vialli began his career at home-town team Cremonese in 1980 and 12 years later moved to Juve, where he won the Serie A title in 1995 and the following year’s Champions League.
Lecce stun Lazio
Six points behind Milan are Lazio, whose defeat at Lecce came after Ciro Immobile had given them a half-time lead with his 189th Serie A goal, which took him above Alessandro De Piero and Beppe Signori in the all-time scoring charts.
Gabriel Strefezza levelled for Lecce just before the hour mark, and Federico Di Francesco’s brilliantly volleyed cross find Lorenzo Colombo for a tap-in which moved his team up to 12th, nine points clear of the relegation zone.
“We completely lost our way after the break… We just switched off and handed the game to our opponents,” said Lazio boss Maurizio Sarri.
Lorenzo Pellegrini drew sixth-placed Roma level on 30 points with their local rivals with an early penalty which gave his team a 1-0 win over Bologna.
Mario Pasalic snatched a last-gasp 2-2 draw for seventh-placed Atalanta at Spezia with a stoppage-time leveller to complete a comeback from two goals down.
Spezia are five points ahead of Sampdoria, who sit 18th after claiming their second win of the season, 2-1 at Sassuolo.