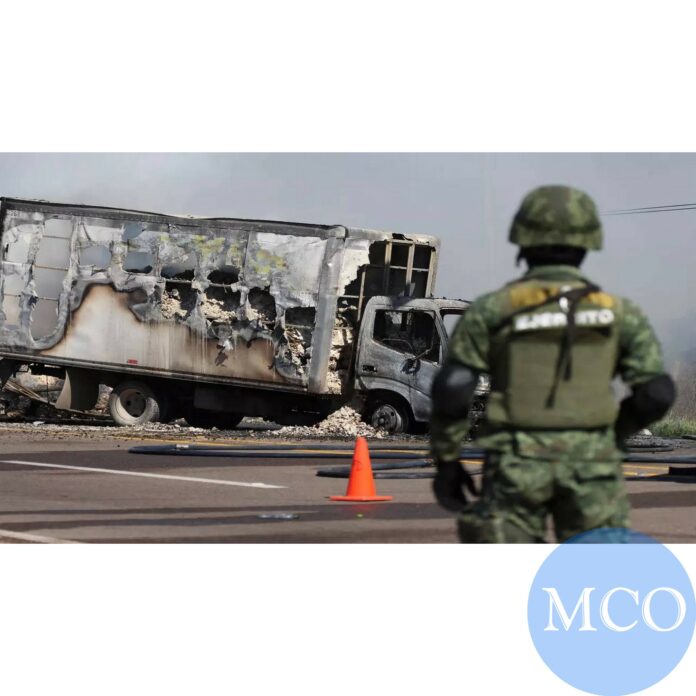 Culiacan: After the arrest of a son of infamous Mexican drug lord El Chapo, riots in the state of Sinaloa resulted in the deaths of three security personnel. After a six-month surveillance operation, Ovidio Guzmán-López, who is thought to be the current boss of his father’s old cartel, was apprehended in Culiacán, BBC reported.
Gang members who were enraged stormed a nearby airport, blocked roads, and set cars on fire. 18 persons, according to the state governor, were admitted to the hospital.Gunfire struck two aircraft, one of which was about to take off. Three airports in Sinaloa saw the cancellation of more than 100 flights. It claimed that no clients or staff members had suffered injury. In what looks to be a social media video, passengers can be seen hunched down and trembling in their seats.

According to Defence Minister Luis Cresencio Sandoval, Guzmán-López, also known by his alias “The Mouse,” is charged with running a division of his father’s infamous Sinaloa cartel. It is one of the world’s biggest organisations involved in drug trafficking.
His father, Joaqun “El Chapo” Guzmán, was convicted of drug trafficking and money laundering in 2019 and is currently receiving a life sentence in the US. Some of the gruesome details of the Mexican drug gangs’ operations were made public during his trial.
Mexican Defence Minister Sandoval stated that Guzmán-López has been sent to a secure facility in Mexico City as a result of the surveillance operation that was conducted to catch him.
Social media videos depict flaming buses obstructing traffic in Culiacán, the capital of Sinaloa. Since Thursday morning, federal armed troops have been conducting an operation in Culiacán.
Several areas of the city were blocked off, and the Mayor advised the populace to remain inside. Numerous stores were also robbed. According to reports, security personnel and gang members remained exchanging gunfire into Thursday afternoon.
Guzmán-López was previously detained by Mexican security agents in 2019 but was later freed due to the danger of violence from his supporters. Additionally, they have stated that evidence suggests Guzmán-López ordered the killings of informants, a drug dealer, and a well-known Mexican singer who declined to perform at his wedding.